Photographers pursuing making images beyond simple snapshots tend to quickly run across the rule of thirds. But rules are made to be broken, as the cliche states, and sometimes a shot works well with the subject closer to or at the center. (For that matter the "rule" of thirds is only a guideline, after all.) What interests me here is the opposite, where one moves the subject of a shot, or at least one of the important elements, further away from the rule of thirds locations towards the boundaries of the image. Here are two images that do so quite successfully. 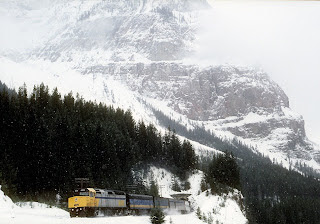 The first image is a mountain image by John West (captioned version here). And that is the point; in one sense it is a mountain image, against which the train measures up as a trivial presence. Of course, the primary subject is the train. In particular, it does not appear so small that it is difficult to observe and relate to, and for that matter the mountain is not so much a second element in the composition as the primary background and definer of scale. The image is a train in its environment, not an environment with a train in it. And yet, the mountain is huge; its peak is clearly well above the top of the image. Its height receives greater emphasis because of the placement of the train at the very bottom of the image, instead of, say, at a rule-of-thirds location.

Of course, there are other things to love about this shot, the falling snow, the splash of yellow in an otherwise field of muted colors. 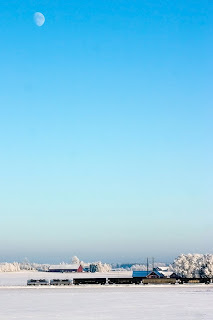 The second shot, by contrast, is a flatland scene by Francois Iliovici, taken at Fagelsta in Sweden. This shot also reduces the scale of the train relative to that of nature, albeit in a different way. The shot has two elements, of course, train and moon. Francois could have easily placed the train at the lower rule of thirds location and the image would have been just fine. Instead, he places it further down, not on the margin but well down toward it. As a result he creates a greater sense of space, in the compositional meaning of the term as well as the astronomical! Thus, here, instead of a mere mountain, it is the cosmos itself that is being juxtaposed with the train.

Notice also the gradual transition, the gradient, in the sky color, from whitish blue at the bottom with hints of light red to a full sky blue at the top. Very nice! [BTW, the orientation of the scene is such that it appears not to be level, but it is.]

It comes to mind that this type of composition has something in common with the Cut The Corner compositions I discussed a few weeks ago. Both posts show examples of how photographers can successfully go beyond standard approaches.
Posted by Janusz at 6:05 AM

Welcome to my blog!

All images can be viewed full size by simply clicking on them. In Firefox (at least) if you right-click, you can open them in a new tab.

Janusz
I am an occasional rail photographer, having been taking pictures of trains, and other subjects, on and off for 30 years or so. I am a regular poster on the RailPictures.net forums and I have a modest set of shots uploaded to that site. My other photography interests include taking pictures of my children, of city scenes while on long walks, and the occasional landscape and zoo animal shot.